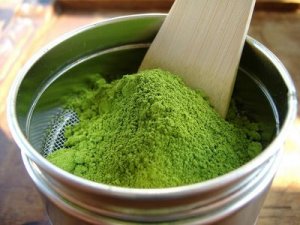 Green tea contains potent antioxidants called catechins, which scavenge for dangerous free radicals in the body. The most powerful catechin found in green tea is EGCG (epigallocatechin gallate), which is believed to be a powerful anti-carcinogen4.

A 2003 University of Colorado study confirmed that drinking 1 cup of matcha green tea has 137 times the amount of antioxidant EGCG compared to a conventional cup of green tea1.

One of the locales in the world where people live the longest is Okinawa, Japan. The Okinawan people’s longevity has been partly attributed to regular consumption of Matcha Green Tea1.

Matcha green tea is the most popular green tea in Japan, but is rapidly gaining more popularity throughout the world because of its ability to combat inflammation, oxidation and aging.

A 1999 study featured in the American Journal of Clinical Nutrition demonstrated that green tea extract rich in catechins has thermogenic properties and promotes fat oxidation beyond that explained by the tea’s caffeine content.

It was found that consuming green tea increased thermogenesis (the body’s rate of burning calories) from 8-10% to 35-43% of daily energy expenditure6.

Matcha is grown in the shade, which is why it is richer in chlorophyll than other green teas. Chlorophyll is the pigment responsible for giving leaves their green color. The Hulk would be proud!

Chlorophyll is purported to detoxify the body1, but this has yet to be scientifically proven. I wanted to mention it because of its supposed ability to clear the body of toxins, heavy metals, poisons, dioxins and hormone disrupters.

Matcha green tea contains up to 5 times more L-theanine than conventional green tea2. L-theanine is an amino acid with psychoactive properties, capable of inducing alpha wave activity in the brain.

Although matcha contains some caffeine, the relaxing properties of L-theanine counterbalance the “jittery” effects of caffeine. Therefore, a cup of matcha green tea promotes concentration and clarity of mind without producing any of the nervous energy typically associated with coffee2.

Try a cup of matcha green tea as an afternoon “pick-me-up” anytime you need extra focus. matcha green tea is an ideal substitute for coffee because it provides an energy boost without the headaches1 you might get from a coffee crash.